What do these two-word phrases have in common?

Besides their connection to “bracketology” and the three greatest weeks of televised sports, the NCAA Men’s Basketball Tournament is a not-so-subtle reminder that people are susceptible to the power of alliteration. As though exerting some odd, gravitational effect on people trying to label topics, brand products and organize information, alliteration is a powerful mnemonic device. (Some grammarians might call it a demonic device.)

Alliteration lends itself to easy memorization as we both hear and see the similarities of the alliterated words. Preachers and politicians use it. Taglines and ad jingles leverage it. I’ve even seen grown adults hammering out corporate mission statements, trying to crowbar some word or another into a phrase just to make sure that alliteration is preserved. It’s as if the company’s real mission is to use alliteration in their mission statement, because other, better words were rejected that more faithfully defined their companies.

Literature of all types is filled with widely ranging examples of alliteration. Dr. Seuss made great use of the device. 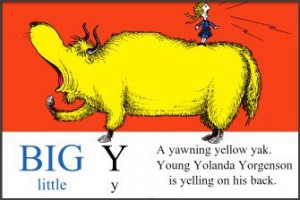 “… his appearance: something displeasing, something down-right detestable. I never saw a man I so disliked and yet I scarce know why. He must be deformed somewhere …”

Alliteration’s effectiveness as a literary device lies in its ability to focus the reader’s attention and fortify the descriptive language being used in a passage.

So please know that I am not bigotedly biased or belligerent enough to banish this type of language. I’m actually possessed of a positive preponderance to promote alliteration when appropriate. So while it’s not the only tool in the writer’s toolbox, there are often good reasons to use alliteration’s effectiveness when attention and memorability are at stake.

Whoever knew that initial vowels and consonants had so much power to guide our thought processes and assimilation of information? And don’t get me started with the vowels that follow those initial letters.

That’s a real kick in the assonance.