The Olympics are on and over 200 countries are in showcase mode. As the host nation, Great Britain has pulled out all the stops to creatively package its people, athletes, major city and culture. It’s a global Cirque de Solei feast for the senses.  Of course the United States is there in full force, as the world expects, reminding all who is the super power in media, entertainment, business and—oh yeah, sports.

Since brands are simply a set of perceptions and images that represent a company, welcome to brands on a new level: country branding.

Are these countries selling something? Certainly. Beyond the 10,500 plus athletes, nine million sold ticket seats and 40.7 million viewers on NBC alone—this is one worldwide brand festival!

There are even the brands within the brands—the athletes themselves. People like Michael Phelps, LoLo Jones, Missy Franklin, Lebron James. All popular and highly marketable brands.

So you’d think that the $1.3 Billion price tag for NBC’s TV broadcasting rights would bring them the gold, right? Actually, NBC is predicting a $100 Million dollar loss. And, to make matters worse, tech-savvy fans are complaining about the scarcity of livestream broadcasts (among myriad of other things). 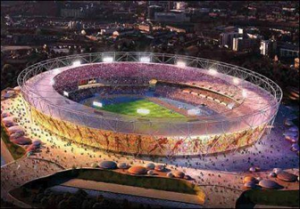 “Jeff Jarvis, a magazine editor turned social-media apostle, compared NBC’s coverage unfavorably with that of the BBC and argued that the network was failing to accommodate the Twitter age. ‘The problem for NBC as for other media,’ he wrote, ‘is that it is trying to preserve old business models in a new reality.’ “ –LA TImes

Broadcasting traditionally to Americans across five to nine hours away presents other challenges for our 24-7 media society. People want to see programs whenever and wherever they can. I get the idea of airing table tennis at 6 a.m. or an archery bout at 10 p.m. MST, but we now want it all at a more convenient time. Or, do we really?

Expect it all, livestream or however you like it (or not), available everywhere in 2016.

And how about smaller countries, like Nicaragua? They have just six athletes at the Olympics. I was just there in the actual country and they have a tremendous brand identity problem: severe poverty and a terrible trash/sanitation epidemic. Nicaragua needs much more than great marketing, but a proven political leader like Rudy Giuliani to clean up the country (like he did with New York City) and bring some much needed dignity to the people. But I’ll save that one for another time.

How is brand USA doing right now? Let me check my phone…

“Change is not a destination, just as hope is not a strategy.”
—Rudi Giuliani