A while back, my wife and I were at the hospital with her aging mother. (By the way, I’m one of those fortunate people to have a mother-in-law I absolutely love and enjoy being with.) The intake staff at the emergency room began asking us a series of questions that had a familiar ring to them. That’s because we had answered them twice already in the past month—all 25 of them!

This was our third emergency room visit in a month; and each time we showed up, we were treated like aliens needing to be debriefed. While I’ll grant the hospital a high measure of consistency—the questions were identical each time—I found myself wondering where exactly all the previous answers had gone.

This complete absence of familiarity is death to progress along the customer decision journey that marketers seek to nurture. It’s like the band that greets a sold-out concert of cheering fans with “Helllloooo Houston!”  Problem is they’re in Austin.

Familiarity is crucial to moving your audience from a mere testing/dating relationship to a more serious engagement. Becoming a customer’s good habit is a privilege. A very lucrative privilege. Especially in today’s loyalty-strained, free agent, what-have-you-done-for-me-lately culture. 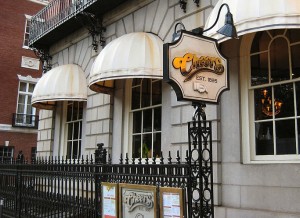 It’s the Cheers factor: you wanna go where everybody knows your name. For example, while in college, my daughter took her car to the same mechanic my dad starting using 50 years ago. They’re way more expensive than Grease Monkey, but we’ve used them for half a century and the same family is still running it. Or another example: the tellers at my dog-friendly bank know my dog Mollie by name, and they give her a Milk Bone at every visit when she runs behind the counter to get her treat. (By the way, if I ever get out of the ad business and become a bank robber, I’m taking Mollie along as an accomplice.)

This level of intimacy and familiarity enables prospects and customers to drop their guard. They become a bit less inclined toward comparison-shopping. They integrate a provider of products or services into their daily routines. This, of course, is the real genius of Amazon Prime. Starbucks also has this one down cold (or hot, as it were). McDonalds’s was an early pioneer here, becoming a predictable, repeatable icon of American life. You can order the same hamburger in Moscow, Russia, that you can order in Moscow, Idaho. Starbucks—the new McDonald’s—delivers that same familiarity.

An investment in this level of customer intimacy—whether achieved online or off—is rewarded with landing the highly coveted repeat customer. The loyal member. The perennial donor. The customer who finally stops asking for a quote every time they place an order. These are people who become your friends (and not just on Facebook, though they should certainly be there too) and you become theirs.

One way to ponder this aspect of audience engagement is to think back to your first airline flight. It was a big event, fraught with the inherent danger of defying gravity in a flying bus filled with highly flammable jet fuel. But now, as a seasoned traveler, your only concern is whether your laptop battery will last the whole trip or if the guy behind you is using the Knee Defender. You’re still defying gravity at 500 mph, 35,000 feet above the earth’s surface in a flying gas tank. Only now you’re comfortable with it.

Similarly, businesses that quickly lower the barrier to introduction and then cultivate increasing comfort and familiarity over time are making an investment in the economic sustainability of their businesses. The two big questions then, for CEOs and business owners, become pretty simple:

What can we do to make it easier to start doing business with us?

What can we do to make customers never want to leave?

A half-day brainstorming meeting dedicated to answering just those two simple questions could revolutionize an organization.