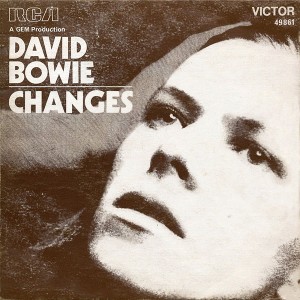 David Bowie’s song “Changes” has been on my mind all day. A few days ago, it was John Lennon’s song “Beautiful Boy” with his now famous lyrics, “Life is what happens to you when you’re busy making other plans.” Funny how a song or a tune can live inside your head.

No matter how much we fight against change, we must always, ultimately submit. I like what Ben Franklin said:

Ben’s words are as true today as they were in the 18th century. But unlike Ben’s world of inkwells and delivery by horse, change in our world not only happens at a dizzying pace, but it happens 24/7.

It’s not that we like it either. Us humans prefer the status quo. People have always had a hard time of dealing with change, especially in their work.

It wasn’t that long ago, when my Dad said that young men who got work in the coalmines were set for life. Imagine that! He was saying people were lucky to work underground in the most horrible conditions imaginable for 40 years.

If you’re a businessperson in the 21st century, you expect change. Technology changes, jobs change, people change jobs…constantly. Today, if you don’t change, or adapt to change—you will be left behind and your business will falter, or most likely fail.

And while change is difficult for us individuals, it’s even more difficult for our organizations. “We are doing what?” “Why do we have to change after again?” “I am too busy to learn that new stuff.” “This won’t work.” Etc.

We’ve all been there.

Have you ever resisted change in an area, and then later regretted it? I have. When desktop computers and software first came out, I had my staff learn to use it, while I managed the team. In fact, I never even took a class, ever, even though I had my staff learn. What a mistake. To this day, I struggle with learning software and technology.

All because I didn’t change.

And while having my own service business for 24 years has been one of the best, most rewarding experiences of my life—it has also been one rife with change. And the most difficult of all the changes for me has been the change in people.

For a company of about a dozen employees, I have seen over a hundred of them pass through these halls since 1991. My longest employee just retired after 20 years. Another senior person just found a new job after 14 years. Some current employees have been here 12 years. Yet, most are here for about 4 or 5 years, then gone.

Is that good? Bad? Studies from the 2014 Bureau of Labor Statistics say the average length of employee tenure is 4.6 years. Average tenure of a Millennial is 3.2 years. That’s a big change from 40 years in the mines!

I’ve learned to survive and even thrive in business today, you can’t just put up with change. You have to truly embrace it, see the good in it, and get better because of it. It’s only then you can move forward with confidence—and even joy. Why?

This too, will change.

“Change is the law of life. And those who look only to the past or present are certain to miss the future.”
– John F. Kennedy