“Gentlemen, you had my curiosity… but now you have my attention.”

Today, I got the best one-line email I could have hoped for from a client to whom we pitched a pretty radical idea:

That’s the sign that even though we were pushing the envelope a bit, we still had an idea that was both relevant and compelling. (Trust me, I have plenty of bad ideas that are neither.)

This reminds me of Leonardo DiCaprio’s character Calvin Candie in Quentin Tarantino’s new movie Django Unchained who says to his future compadres:

“Gentlemen, you had my curiosity… but now you have my attention.”

Was there ever a more succinct description of successful marketing?

Curiosity is that first step of discovery whether it be scientific, philosophical or marketing-related. It’s the evidence of getting traction with an audience.

But it can’t end there.

To make the jump from curiosity to interest is the hard work of marketing. Curiosity, while necessary, requires little commitment on the part of the audience. In fact, it often happens unconsciously.

But being interested? That means your audience is consciously engaged.

They are paying attention.

That may seem like a modest accomplishment, but it’s worth millions. Inundated as people are by the 3,000+ commercial messages they receive each day, if you have actually become interesting to them, the battle is half won.

So to be interesting is better than being informative at the outset of the communications process.

Too often, in an effort to cram every feature and capability into a web page or a video or a brochure, there is nothing left to the imagination, nothing to pique curiosity and nothing to inspire interest.

But engage someone’s imagination, and now you have his attention. To help someone visualize the future with your product or service making things better—that’s a winner. You’ve ignited a process of mental integration, moving from the imaginative to the cognitive. You now own a few brain cells of real estate in the mind of your customer.

To ponder this more closely, you only have to think how engaged you find yourself when a movie generates curiosity and interest about how it’s all going to play out.

Now all this presupposes that you have something interesting enough to stimulate your audience’s curiosity. That your product or service is not just another commodity, which is why differentiation is such a crucial component of branding.

And not only must a product or service be differentiated, but the way it is communicated must be curiously different too. And if you can do that, just maybe one day you and your idea will achieve Altoid staus: “Original, Celebrated and Curiously Stong.” 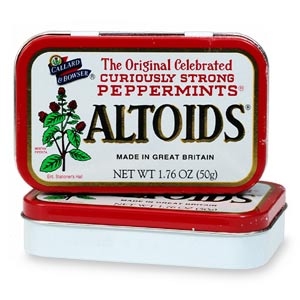