Home / Branding / Immersion In A Brand

Immersion in a Brand

Francis Ford Coppola tells the fascinating story of how, in 1971, prior to filming The Godfather, he gathered the highly revered Marlon Brando and three young actors—Al Pacino, James Caan, and Robert Duvall—in a private dining room at an old Italian restaurant to do the first reading of the script.

By creating an immersive environment in which the young up-and-coming actors could interact with their legendary hero—a cinematic father figure—Coppola instantly produced the familial relationships that would eventually define the movie and the roles of the actors. If you’ve seen The Godfather, you know how important “the family” is to the plot and the development of the characters. 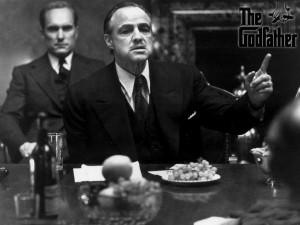 There’s a great lesson for marketers here, especially those involved in the work of branding. Branding is a distillation process whereby the essence of an organization is closely examined and then reduced to its essential qualities. It’s an experiential process that we enjoy here at The Creative Alliance. We study our clients at close range, playing anthropologist, artist, chemist and engineer along the way.

Hopefully, what we end up producing is an authentic reflection of our client as a result of having plumbed the depths of their world and the world of their audience.

But more than just a reflection. A projection as well.

Just as Coppola was able to create a cinematic experience from Mario Puzo’s book and the fine actors he had at his disposal, so a brand, properly developed, will create a whole that is far greater than the sum of its parts. So just as every scene in The Godfather could win an award as a finely composed photograph, so also every expression, every possible touchpoint of a company’s brand should be artfully and consistently executed with that same attention to detail.

Only with the commitment to build on an authentic, relational experience like Coppola did with his actors, can an agency succeed in stirring the hearts and engaging the minds of a client’s audience. Rather than rushing through the branding process and failing to uncover the “good stuff,” a thoughtful, immersive approach to studying a company in order to evoke a breakthrough expression of its brand is an offer you can’t refuse.