Polymath, founding father and inventor Benjamin Franklin has one other accolade to his name:

As a man of letters (quite literally: he operated a letterpress shop in Philadelphia), he published The Philadelphia Gazette and also served the printing needs of the local colonists. Being an ambitious entrepreneur, Franklin knew how to use his printing capabilities to advance ideas that would ultimately result in more business for his print shop. For example, when the Pennsylvania Assembly was debating raising the limits on the amount of paper currency allowed to circulate in the colony, Franklin wrote an anonymous pamphlet, A Modest Enquiry into the Nature and Necessity of a Paper-Currency. 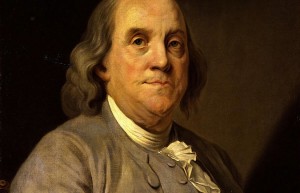 This powerful bit of content attracted the attention of the public and the legislature, and he was soon awarded a lucrative commission to print the currency—just one of the reasons Franklin biographer Walter Isaacson calls him “the country’s first unabashed public relations expert.” That also makes him America’s first content marketer. Like any good entrepreneur, Franklin had a few misses along the way, but most of what we wrote and published sold quite successfully.

Franklin understood the technology of printed communications firsthand as a printer; but he also had an uncanny ability to identify subject matter that his readers would want to read, most notably Poor Richard’s Almanac. This combined mastery of technology and compelling ideas is exactly what makes for success in today’s digital mediaspace. It’s why content creators are increasingly being encouraged to become adept at coding, not just writing. (And it’s why coders should learn to write.)

One might also credit Franklin with hosting the first social media group in America. At the age of 21 (two years older than Mark Zuckerberg was when he launched Facebook) Franklin created the Junto, a group of “like minded aspiring artisans and tradesmen who hoped to improve themselves while they improved their community.” The Junto was a discussion group for thought-provoking issues of the day, many of which were addressed as content in Franklin’s writings.

The Junto also served as a charitable organization. It launched a public library built out of the members’ own books—an early form of crowdfunding of in-kind donations for a worthy cause.

Today, as in Franklin’s day, a keen sense of timing plus mastery of the latest technology are important to content marketing. But even more important are the creative, thought-provoking ideas that can truly engage an audience.

One can only imagine what it would be like to see Benjamin Franklin take the TED stage.