I ran across an article in The Atlantic that used the expression “a David and Goliath story” to describe the immigration reform battle.

The David and Goliath story is one of the most powerful analogies a communicator can use to describe an adversarial scenario between imbalanced competing interests. Especially where the weaker party is deemed to be the more righteous competitor.

David and Goliath terminology has been used to describe a wide range of business, sports and political activities: 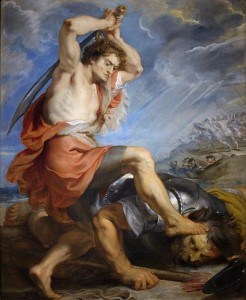 Like all good analogies, David and Goliath is a highly picturesque one. It conjures up images from Sunday school or other associations. While the story itself is biblically-based, (you can read I Samuel 17 here) it has become part of Western civilization’s collective unconscious among religious and non-religious folks alike.

But beyond being a tremendous analogy based on a captivating biblical story, David and Goliath carries with it a moral imperative. The little guy—David—is the proponent of a righteous cause, while Goliath represents the big, bloated, unrighteous oppressor.

So when communicators use the David and Goliath analogy, the moment they associate one side with David, it automatically and unconsciously positions that side of the conflict as the good guy. The mere mention of the analogy sets the terms of the conversation—a form of “anchoring” in Daniel Kahneman’s vernacular. It’s a powerful and effective communication tool as it would require an audience’s conscious, intentional effort to unwind the pre-supposition behind it.

Of course, like any communication tool, it can be misused. That’s why you see, for instance, large corporate interests and lobbying groups use “Citizens for _________” to name their fake grass roots organizations (“astro-turf “ as some have called them). It’s like Goliath trying to disguise himself as David. Busy consumers and voters usually don’t have time to unpack the PAC, so it seems plausible that the little guys really do want fracking, gambling or unbridled development in their communities.

In the biblical account, David beats Goliath and there is something reassuring about seeing the weaker, but righteous, protagonist beat the long odds and prevail in the contest. We love upsets,” as one sports writer said. “Unless our team is on the wrong end of them.”