As people try to make sense of complex experiences, their thoughts often catalyze around a symbolic object. If that object is an iconic, branded consumer product, the catalyst can be quite powerful.

To wit: The use of the Skittles candy as a symbol of sorrow and outrage over the tragic (and potentially racist) shooting of young Trayvon Martin by a neighborhood watch volunteer in Sanford, Florida earlier this month. The unarmed 17-year-old was found dead with a package of Skittles candy. There is something about that oddly simple fact that bespeaks the innocence of childhood and thus the cruel victimhood given the circumstances.

When protesters began sending the Sanford police department packages of Skittles to register their insistence on an inquiry, they were leveraging a well-known consumer product icon to emphasize their demands. The brand physics at work here are amazing: they used a well-known consumer product’s years of branding and positioning to augment the visibility of their cause. It gives their protest a concrete, visceral image that similar protests—though equally just—simply lacked. In fact, the 24-hour news cycle serves up so many stories of shootings and protests that they sadly begin to blend into the background noise. 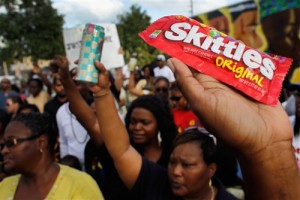 On another front this week, a similar dynamic took place within the Romney Republican primary campaign, this time with a different well-recognized, clearly branded product: the Etch-A-Sketch.

Romney political aide Eric Fehrnstrom, when asked if Romney had perhaps moved too far to the right for general election success, told a CNN interviewer that the GOP hopeful would “hit a reset button” for the fall campaign, saying, “It’s almost like an Etch-A-Sketch. You can kind of shake it up and restart it all over again.” 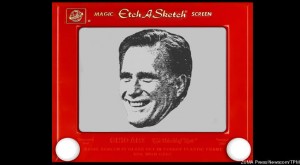 Well, it didn’t take long for the Santorum and Gingrich folks to leverage that powerful consumer icon. They’ve been calling Romney a flip-flopper ad nauseum for months. But now, armed with an Etch-A-Sketch, the charge of duplicity takes on new energy. It’s as if the decades of Etch-A-Sketch advertising, sales and hours of play by millions of kids (who are now grown-up voters) became the fuel to energize a fresh new round of accusations.

The lesson for marketers here is clear. Symbols are powerful things. They somehow evoke feelings and emotions that talk and text can’t always deliver. Regardless of whether it’s a bag of candy, a classic toy or any other object, these symbols function as the fuel rods of a message gone nuclear, radiating through the media.