My wife and I are going to cold, wintery New York tomorrow morning to experience the biggest sports and media phenomenon in America, and possibly the world—Super Bowl XLVIII. That’s 48 in Roman numerals, a subtle reminder that our modern era has evolved from the ancient days where glorious—and inglorious—spectacles were held in their Coliseum.

Have we really evolved? 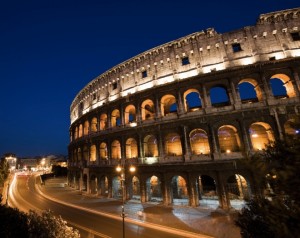 Ah, the dream called Rome. As we prepare to leave for this grand spectacle of American culture, I am asking “why?” I have talked myself into believing that I have good reasons. I own a company that sells NFL licensed products. So I am going to represent my business that benefits from the relationship. Living in Colorado has made us big Denver Broncos fans. So we are going to root for our team. And, I’m in the marketing business, and this is advertising’s Super Bowl. So, this is a once in a lifetime experience.

Then again, maybe we just want to feel super.

Data says that 181 million American’s will watch this year’s colossal event. About 40% of viewers will watch on their phones, tablets or laptops. The TV ads are clearly as big as the game itself, maybe bigger. Kantar Media says that the commercials will have a 1.6% bigger audience that the game, although 47% of viewers say the game is more important than the commercials. Gosh. Is the medium the message, or visa versa? Or has that evolved, too?

Companies will spend about $4 million for a 30 second TV commercial, and that’s just for brand awareness. Most aren’t even selling anything. Game tickets start at about $1,500 each and go as high as $100,000 or more. When I told my 84-year old father the ticket price, I felt a little dopey. I remembered him telling me how to save money as I emptied my paperboy change on the dinner table during the first Super Bowl in 1967. It featured the University of Arizona Marching Band at halftime, playing patriotic music with “The Liberty Bell” as its set list. Last year’s half-time extravaganza featured Beyoncé crawling around in an outfit that I wouldn’t be allowed to see until I left my parent’s home for college. I don’t think I even heard the words to her song, “Bootylicious.”

As a history buff, I know that Roman emperor Vespasian used the “booty” his army seized from the Jewish war to build the Coliseum that would feature their super bowls. These days we are much more civil and just take more money from taxpayers. Imagine this as the top TV commercial in ancient Rome: Old people bust out of their retirement home and get into all kinds of teenage trouble: Regrettable tattoos, public displays of affection, breaking and entering, pyrotechnics, and finally an 80-year old guy who presses his nipple against the restaurant window, as they get late night food from Taco Bell. Man, that sure makes me hungry for tacos.

Who played the Coliseum the year Rome fell, anyway?

“All great change in America begins at the dinner table.”
– Ronald Reagan