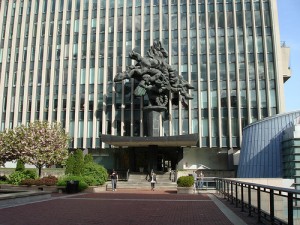 Jacques Lipchitz interprets nature.
A contemporary of Pablo Picasso, Jacques cut his teeth as a sculptor in the Cubist movement. At its height of artistic innovation in the 1920s he experimented with abstract forms he called transparent sculptures. Later he developed a more organic and dynamic style, which he applied with great skill to bronze compositions of human figures and animals.

Impressive. But that’s not why he inspires me.

I remember seeing a PBS special about his life and work. As I watched this very intimate documentary I found myself feeling exhilarated about being an artist. And even though this program was filmed while Jacques was in his early eighties, he had the energy and passion of a kid. He was talking in great depth about a major sculpture he was finishing for NYU in Manhattan; an immense, sprawling mass of humanity intertwined over the entrance to a building of higher learning.

He was sharp on the details. His team of apprentices and other budding sculptors were working diligently like a fine-tuned symphony on the latest creation under a New York sized erector set of scaffolding. Busy. Purposeful. Everyone on a mission to bring another Lipchitz masterpiece to life.

Then, all of the sudden, the documentary changed. Jacque’s wife was on camera speaking quietly in the bright light of their lower east side apartment. I turned up the volume. Jacques Lipchitz, the artistic energizer bunny and towering voice of art history, died, suddenly in his sleep.

His wife: “Jacques was always so excited. Last night he was chattering about the final touches of this piece and woke me up twice to tell me an idea he just had about making some detail better. (Long pause) He would always tell me that he loved having the God-given gift of being an artist. Jacques said an artist was the only profession he knew where people get better, not older. Well, he proved that, right? I woke up this morning and there he was, gone—lying peacefully in bed, with that little boyish grin on his face.”

And with that, the documentary ended.

I wrote that deep into my heart. Artists get better, not older. Those words and images are etched into my heart like a carefully crafted, and boyishly imagined Lipchitz bronze.

What a privilege to create. To inspire. To give something that makes people hope and dream of greatness.