TCA Founder and Creative Director Began Agency in His Basement

The Creative Alliance turned 25 on April 1. Our leader T Taylor loves the fact that he began The Creative Alliance in 1991 on none other than April Fool’s Day. Back then, statistics showed that 80% of marketing agencies don’t make it past the first two years, but 25 years later we must be doing something right. A big part of that is helping visionary leaders and their businesses achieve their goals and grow to the next level, while having fun doing it.

TCA was originally a “creative alliance” of the area’s best freelance designers, writers and artists. That traditional direct marketing and advertising agency has evolved over the years to become a leading digital marketing firm serving a national clientele. What began in T’s basement outgrew three Lafayette locations before he built his own building in Forest Park at 95th and Arapahoe in 2005. The building also houses Nissi’s, a live music and events venue that was founded by T’s wife, Teresa. 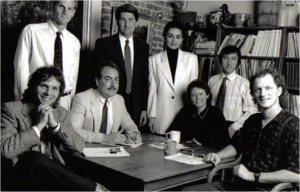 Last Post: They Laughed When I Started My Own Business, But Then I Started to Work!
Next Post: What do you stand for?