Wednesday marks the 50th anniversary of a truly momentous day in American history, the March on Washington (full name: “March on Washington for Jobs and Freedom”). The day was filled with lofty oratory by numerous speakers, observed closely by friends and enemies alike, and lauded afterward by President John F. Kennedy, himself one of the great speakers to occupy the presidency.

The event closed with the most powerful speech of the 20th century—one that stands second (perhaps) only to Lincoln’s Gettysburg Address for its beauty and significance. 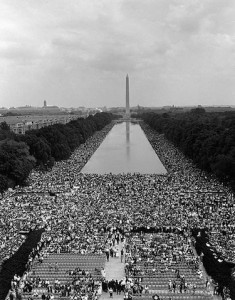 As with all the great communicators throughout history, Dr. Martin Luther King, Jr. was a skilled storyteller who used richly picturesque language to move his audience—not just the hundreds of thousands gathered around the Reflecting Pool on the Washington Mall, but on radios and TV sets in millions of homes, factories and offices across America.

After several other speakers had inspired the receptive crowd with soaring, passionate language, Dr. King took the podium, and deviating from his prepared notes, painted a picture of renewal and national redemption with these phrases:

I have a dream that one day this nation will rise up and live out the true meaning of its creed: “We hold these truths to be self-evident: that all men are created equal…

I have a dream that one day even the state of Mississippi, a desert state, sweltering with the heat of injustice and oppression, will be transformed into an oasis of freedom and justice.

I have a dream that one day the state of Alabama, whose governor’s lips are presently dripping with the words of interposition and nullification, will be transformed into a situation where little black boys and black girls will be able to join hands with little white boys and white girls and walk together as sisters and brothers…

Let freedom ring from the snow-capped Rockies of Colorado!

Let freedom ring from the curvaceous peaks of California!

But not only that; let freedom ring from Stone Mountain of Georgia…

His majestic voice aside, this is the pure poetry of repetition blended with robust metaphor and augmented by visual, visceral language. 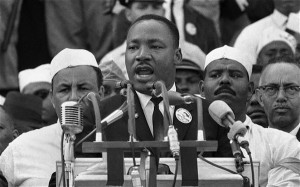 This is persuasion at its best—persuasion that wells up from within the listener and compels action. It is a speech unequaled in a half century known for communication. Pictures are painted in your mind when you read the transcript or hear a recording of this speech, and you can’t help but be swept up in the contemplation of a new and better country. Every professional communicator can go to school here and be the better for it.

If anyone was on the fence about civil rights that day, they were no longer ambivalent. The speech’s moral authority moved an entire nation to consider racial equality as a paradigm for justice and an achievable reality. King’s words inspired a willingness to finally test the rigorous application of equal rights for all under the Constitution.

As marvelous as it is to watch the video and see the making of history 50 years ago, I urge you to stop this week and not watch, but rather listen to King’s words:

You can find an audio recording here.